Bitcoin forms the dreaded death cross, but here’s why there might be hope

Since Bitcoin hit an all-time high in mid-April, the cryptocurrency has had it rough. BTC looks set to see the third straight month recording losses. In the past 24 hours, the crypto dipped to just above $31,000, shedding over $2,000 from its intra-day high. In the past seven days, it has lost close to 25 percent of its value. Even more worrying, BTC recently formed the dreaded death cross. While this usually spells dooms for any asset, there might be hope for Bitcoin according to some analysts.

Bitcoin was trading over $41,250 on Tuesday last week, having staged a great comeback in a week to gain just under $10,000. However, since then, it has lost these gains and earlier today, it was trading just above $31,000, a two-week low. It has now lost over half its value since hitting new heights two months ago.

Many analysts attribute the most recent tumble to China. The Asian country recently doubled down on its anti-BTC stance, prohibiting banks from servicing OTC platforms. Its leading banks and payment platforms have now warned users against transacting in BTC as they risk account closure and reporting to authorities. This is in addition to its unceasing clampdown on crypto mining.

The fact that there’s a crackdown there perhaps does take away some of its luster. I’m not sure it’s a signal of a longer-term change in direction, but it can certainly create some volatility. No one is sure the extent of the crackdown and China is an important player in the Bitcoin market.

Other experts believe that the plunge is not just down to China. Meltem Demirors, the CoinShares chief strategist told Bloomberg that it could be down to a wider capital markets trend. She believes that with the current market instability, and fears of economic instability, investors are avoiding risky investments, and Bitcoin ranks highly on this list.

There’s just a lot of fear, and when there’s fear, people sell risky assets. I do think that Bitcoin’s still perceived as a risk-on asset. Generally, investors are skittish. 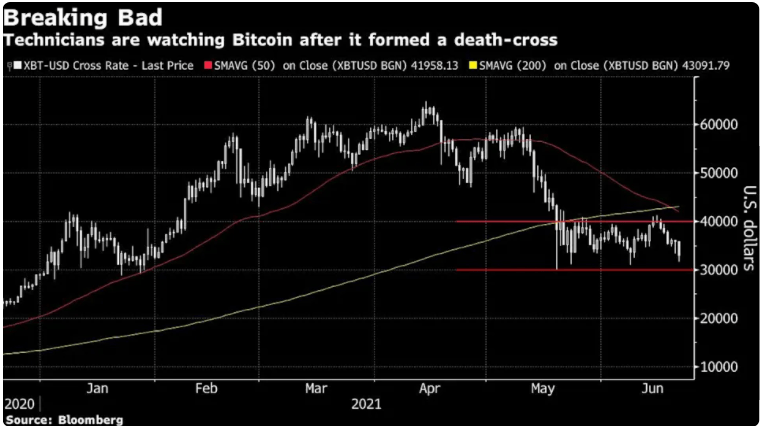 However, for Bitcoin, there’s hope. The last time Bitcoin formed a death cross was in March last year after the crypto shed 60 percent of its value in two months. However, shortly after, it started to reverse the trend and in no time, it formed the golden cross (this is when the death cross is reversed). Over the next year, it would gain over 1,000 percent to hit its all-time high.

Jim Cramer sells all his Bitcoin, he reveals why he thinks it will struggle

Binance’s CZ is the man who has lost the most money in history: Report

CFTC snuffs out crypto ponzi scheme that made away with $44M

Jim Cramer sells all his Bitcoin, he reveals why he thinks it will struggle